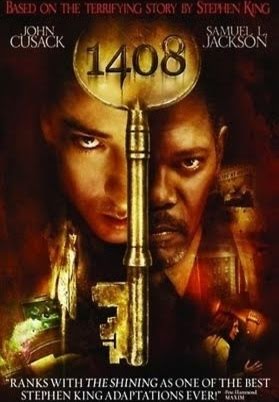 Stephen King has written many novels and short stories about writers, consequently there have been many adaptations to both the little and big screen with Misery and The Shining being the most famous among them. The film 1408, released in 2007 and adapted from a Stephen King short story of the same title by Matt Greenberg, and the writing team of Scott Alexander/Larry Karaszewski , is yet another.

Directed by Swedish director Mikael Hafstrom (Vendetta, 1995 and Evil, 2003) and featuring John Cusack, Samuel L. Jackson and Tony Shaloub, 1408 cannot avoid obvious comparisons to The Shining: the main characters are both writers who go nuts in a haunted hostelry. But John Cusack (whom I love) is no Jack Nicholson (whom I also love) and Mikael Hafstrom is no Stanley Kubrick.

But then who is?

When I think about the movie, The Shining, I have to turn my mind off immediately to stave off the images still stored in my psyche, cause we’re talking about some pretty scary shit, even if Stephen King’s comment on Kubrick’s cinematic rendering of his novel remains:

When I think about 1408, I just get philosophical, but I do dig writer, Mike Enslin (ably portrayed by John Cusack) much more than I could ever dig writer Jack Torrance, and one of the reasons for this is Mike lives in LA and Mike surfs.

As the film 1408 opens, writer Mike Enslin is trudging through the pouring rain to spend yet another night in an allegedly haunted hotel room as research for the latest novel in his series 10 Haunted whatevers. Mike has written 10 Haunted Hotels, 10 Haunted Graveyards, 10 Haunted Lighthouses and now he’s working on 10 Haunted Hotel Rooms. All this exploration into the paranormal has left him constipated with incredulity and profoundly nihilistic. To Mike Enslin the supernatural is a bunch of hooey – albeit hooey that sells.

Mike shows up at a scheduled book signing at an independent bookstore where not even the head dude in charge recognizes Mike as the author of the evening, even though head dude has a flyer on his desk. with Mike’s picture plain as day.

Although set up for maybe twenty people, the “crowd” is more like five or six die-hards including the head dude in charge. Writers raise your hand if you can relate. They all clutch one of Mike’s tomes furtively to their chests or breasts and hang on his every word, asking the most inane questions. Mike’s  bored,  this is just another episode of the same old same old, but then at the end a young woman named Anna approaches his table and plunks down a slim novel by Mike Enslin entitled, The Long Road Home.

Mike is dumbfounded. “Where’d you get this?” he asks. “Ebay,” she replies. She wants to know if he’ll be writing anymore books like this one and if the relationship between the father and son was based on a real experience. Clearly, this book means something to this woman. Mike shrugs it off. No, there will be no more like The Long Road Home. Enslin has stopped challenging himself as a writer. He’s content to hawk his current wares with the catch phrase, “Stay scared.” 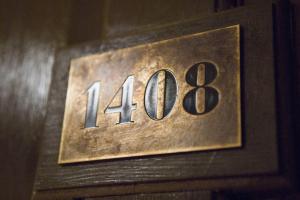 Then Mike receives a postcard from an anonymous source inviting him to stay in room 1408 at the Dolphin hotel on Lexington Avenue in New York City – a room notorious in the annals of the paranormal.

The Hotel Manager, Mr. Olin, portrayed by a handsomely turned out, and uncharacteristically sedate Samuel L. Jackson, rebuffs Mike’s repeated attempts to book into room 1408, to the point where Mike’s publisher (Tony Shaloub) must seek legal counsel, who invokes a Federal Civil Rights statute in order to get Mike into the hotel.

The Dolphin Hotel is a throwback to the Edwardian era, all vaulted ceilings and marble columns, but Mike’s not home free yet. Mr. Olin is just as adamant in person as he was over the phone, he does not want Mike to stay in room 1408, where 56 people have met untimely and grisly ends ranging from someone who drowned in the bathtub to a man who castrated himself.

Mike doesn’t believe the hype. He’s done his homework and this isn’t his first rodeo. Olin sees that he’s really up against it so he switches gears and offers Mike a drink.”You do drink don’t you?” “Well, yes I just said I was a writer.” Look, Olin continues, in a cajoling mood, why don’t you stay in the room next door and say you were in room 1408 nobody but you and I will know the difference. But Mike, like he said is a writer, which entails alcohol, as he’s mentioned, and an insatiable curiosity. Writers have to know everything.

Much to Mike’s chagrin, Mr. Olin has read The Long Road Home and like Anna at the bookstore, he liked it and is looking forward to more of the same from Mike, but Mike has stopped believing in himself as a writer a long time ago, and this to me is the scariest part of this movie, not that Mike doesn’t believe in the paranormal, or God or love or really anything that keeps most of us from killing ourselves; Mike has lost all belief in himself as a writer. What’s worse is he has replaced his old beliefs with belief in the marketplace where his 10 Haunted series makes him a nice piece of change, but adds nothing to his life. Mike doesn’t need to chase ghosts — he has become one.

Enslin does not believe in God, but I’m sure he said a silent prayer once he placed a trembling hand on the doorknob to room 1408. If they gave out Oscars for sheer physical endurance by an actor in a leading role John Cusack should have two of them for this one film. He goes through so much crazy, scary, bananas stuff in this movie I was exhausted from watching him.

I’m not giving away any details about the ending other than to say that a total of four endings were shot, including the one that made the final cut. None of these endings is the ending which appears in Stephen King’s short story, where Mike uses his own personal voo-doo to extricate himself from the horrors of room 1408.

Mike is not a happy guy to begin with, LA  and surfing notwithstanding. He’s stopped writing from the heart. He’s been kind of plodding through life like the walking dead until he experiences room 1408 where he learns the true meaning not of terror but of life.